Director Steven Soderbergh is one of modern cinema’s true giants. His impressive C.V. includes an Oscar (for Traffic), a male stripper box office behemoth (Magic Mike), and a seminal cornerstone in the rise of independent movies (sex, lies, and videotape). After four years away from the big screen he is now back doing what he loves. The multi-hyphenate would appear to have found a Zen balance and clarity in his vision because every moment of his new film Logan Lucky feels effortlessly charming. It doesn’t try to win you over – it just does. This hillbilly Ocean’s Eleven is a confident, rollicking good time.

Down on his luck after being let go from another job, the earnest Jimmy Logan (Channing Tatum) is desperate for a chance to keep his daughter close after his ex-wife (Katie Holmes) informs him that they’re moving away. His brother Clyde Logan (Adam Driver) is similarly in a loop of daily ennui and dissatisfaction, tending a bar with one arm after losing the other in Iraq. Their ancestors have shared tales of Bad Logan Luck over the years and Jimmy’s tired of living in the cycle. He coerces Clyde to join him on a big score that will solve all their problems – robbing a NASCAR event in North Carolina.

Just like in Soderbergh’s Ocean’s Eleven, the planning of the heist and formation of the crew is just as fun as the climactic robbery itself. The brothers Logan recruit their sister Mellie (Riley Keough) and hatch a scheme to break a master safecracker from prison to pull off the most important part of the job.

The talented convicted criminal is Joe Bang, played with glee by a bleach blonde Daniel Craig. A Southern drawl and some prison tattoos help distance the actor from many James Bond comparisons, but the enthusiasm Craig injects into every line and reaction is what sets this role apart. He’s funny but not cartoonish, silly but not stupid. Joe Bang is a damn near perfect supporting character.

The twists, turns, thrills, and surprises are best left unspoiled. Even in the moments that sort of throttle things down a bit there’s still some fun to be had; Hilary Swank and Katherine Waterston portray characters who don’t impact the story one little bit but they’re all just so damn wonderful to watch that their superfluous nature seems like a minor squabble.

Jimmy and Clyde are good-natured boys that have probably had the cards stacked against them from the word go. It’s easy to root for them because we can so easily identify with their sibling comradery and economic woes. They don’t have malicious intentions and no one’s looking to get anyone hurt – it isn’t even about getting filthy rich. All the Logans want is enough to get by with a bit more security. In present day America you gotta take what you can get sometimes.

The humor hits the sweet spot of being hilarious without being mean spirited. There isn’t violence threatened (outside of a memorable bar fight) and objectives maintain clarity and sincerity. It’s difficult to find much to dislike in Logan Lucky – it just all works together so damn well.

Logan Lucky is a pleasant treat during the dog days of summer and checks all the boxes for an agreeable night at the movies. Unlike many cynical viewpoints represented in modern movies and TV, this is a good old-fashioned piece of filmmaking that sets its sights true and earnestly. You’d be hard pressed not to be won over by it. 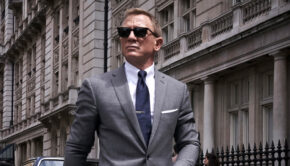 Spectre (Two Reviews for the Price of One) →