The Guest is the latest from Adam Wingard, starring Dan Stevens from Downton Abbey in an excellently silly thriller that could have been called Pastiche.

Oscar Wilde famously said, “Talent borrows, and genius steals.” In The Guest, director Adam Wingard and his writer Simon Barrett nick like dirty bandits from some of their favourite movies in what amounts to a spot the influences gumbo potboiler.   I don’t want to give away too much in a spoiler free review, but let’s just say that The Guest = Drive + The Terminator + The Stepdad + Halloween, and more. Incidentally, Wingard also directed You’re Next, a bit of an overturning of the slasher genre that had some effective moments.

Some will hate The Guest and some will love it, depending on what you think of those influences and how well you think they were used.  Tarantino made pastiche cool with films like True Romance and Pulp Fiction, but he was often crate digging from obscure video store classics that many hadn’t seen, which made it seem like he had come up with these ideas himself.  The Guest is dealing in films that have come out since the 80s, movies most of us remember well.  Some will just say it’s a messy chum, a throwing together of meaty chunks of better movies.  While I can’t argue with the fact that a lot of stuff is flying around and splattering the walls, for the most part I loved the self-conscious winking to the other films.  When heroine Maika Monroe follows Lance Reddick out of a diner, wearing her Sarah Connor waitress uniform, with very Terminator-like music swelling, a knowing grin crossed my face.

The plot revolves around a discharged soldier (Dan Stevens) that shows up on the doorstep of a family who has lost their oldest son to military combat.  He’s there to fulfill what we imagine to be a battlefield promise to the family, to send one last message of love from beyond the grave from their dearly departed son.  It’s a moment that can instantly create an emotional bond, so when the soldier makes a move to exit, the heartbroken mother insists that he stay awhile.  What seems like the set up for an emotional drama about war and family quickly spins off into a dizzying, balls out, no-hall-of-mirrors-is-too-much thriller.  People around the family, tormenters like their other son’s bullies, suddenly feel the hard sting of violence from this protective houseguest.

Dan Stevens, who you’d know as Matthew Crawley from Downton Abbey, has built a bunch of muscle, erasing his baby fat and even giving him a chin.  There’s a scene where Stevens steps out of the bathroom, shirtless before the family’s daughter, which almost causes her to swallow her tongue (I heard a deep sigh from my wife’s end of the couch as well).   Before filming this scene, which they knew they wanted for the trailer, Stevens’ trainers had him fast for 24 hours.  Then right before filming, they had him chug a can of coke and do 100 sit-ups and 100 push-ups.  Apparently, this makes all the veins and muscles pop right out.

If he wants to make a bid for a bigger Hollywood presence rather than doing a David Caruso out of Downton Abbey, this may not be the kind of movie he should really start with, but his commitment is definitely in all the right places.  Though I’m not sure we absolutely needed him and him alone for this role, Stevens is excellent as a good-natured sociopath.  He’s channeling a Gosling-lite bit of intensity in places, but also bringing a chilling amiability to the role.

The Guest gets away with a lot because it shows early on that it doesn’t take itself overly seriously.  However, there are strange things that are off the mark that I can’t get into too much detail about without giving too much away.  There are instances where a quick kill would be the tactical move that this well-trained soldier should go for, but instead he opts for long, messy kills, that leave him open to being attacked.  That said, there are things in this movie that people are calling plot holes that aren’t — we simply aren’t given enough information to call it a hole.  Perhaps what I think was a tactical disadvantage was on purpose, because he’s playing a larger game we can’t see.  It’s also possible I’m reading too much into all of this, creating my own crazy Room 237 theories, but that’s part of the fun of this movie.  Unless you’re my wife.  Then you’re just sick of hearing me talk about it.  You can tell that it is echoing around inside my head a bit.

I usually wait a few months for a second screening of a film, but I rushed a second viewing of The Guest a few days after my initial watch, if only to see it again with knowledge of all the twists and turns.  The Guest is a wild shotgun blast of ideas, neon lights, 80s synth music, violence, and tongue-in-cheek humour.  It might just be because I have a soft spot for the type of movies they’re riffing on, but even with all of the film’s messiness, all of its predictability, I was energized by it like few other movies I saw this year. 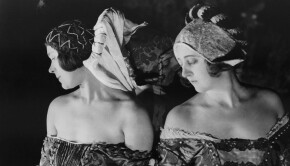 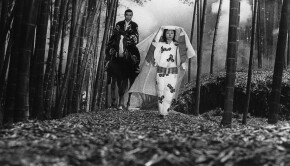 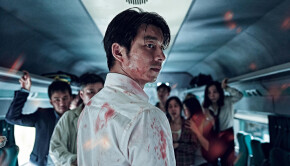 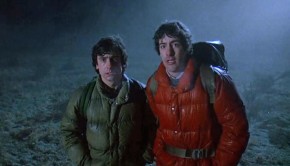 One Response to The Guest