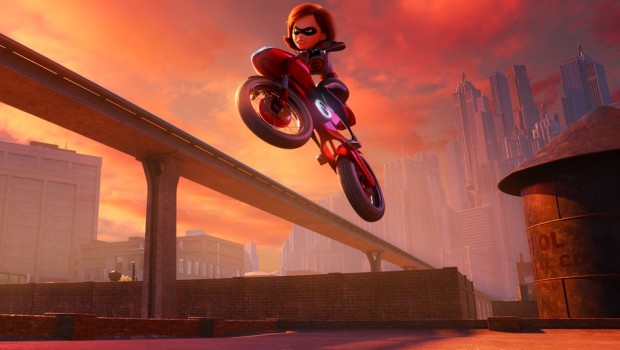 Does The Incredibles 2 have a responsibility to shoot for something brighter than the first film to satisfy the older fans that have now grown? 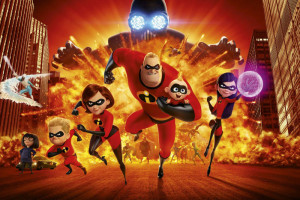 It’s truly a testament to the progress that animation has made in this digital era that a film like The Incredibles 2 can construct a more exciting and concise action sequence than a great deal of CGI-laden live-action films. From the opening sequence, a resolution to the Under-Minor ‘cliffhanger’ viewers (at least 20 and older) will remember from the original, to the film’s raucous finale resembling Speed 2 (a legendarily bad entry into the canon of movie sequels), Brad Bird’s latest PIXAR offering is a dazzling and inventive use of its state-of-the-art technology. The film is visual feast and adds a number of creative outlets for the PIXAR team to flex without sacrificing clarity. However, while the characters themselves continue on their charming paths of juggling daily life with their super-powers, this film doesn’t provide as much room for growth as its predecessor. Beyond its exciting action sequences and visual gags, it’s disappointingly par for the course.

I’ll preface this by saying that it’s a difficult task evaluating this film. Its primary directive is so blatantly oriented around re-jiggering the franchise for the younger generation of kids, ones who were barely (if at all) sentient when the original was released. We’ll call it The Force Awakens Syndrome or TFAS for short. TFAS is a fascinating affliction, in that the films beholden to this condition are usually far from bad. In fact, one of the primary attributes of films with TFAS is that they are sexy to look at and a lot of fun, rife with all the bells and whistles that fans of the original expect. But it comes at a price; the older generation is never quite satisfied beyond the surface level fan-service and the younger generation is handed on a silver platter that which is perfectly enjoyable — perhaps even great in their perception — but will always be condescended down to as second-hand cinema.

Judging from the responses of adult audiences to Incredibles 2, the film has managed to bridge this gap slightly. However, I cannot help but feel that the film is marred by its conservativism, rehashing character arcs and themes that were perfectly evoked in the original. As someone who loved the original as a young boy, I find myself in an awkward position: should I praise the film for technically being sound and on the whole effective when viewed in a vacuum? Or is it valid to be perturbed by the films inability to grow its characters and to really say something distinct? Is that too much to ask from a kids’ film? Is it even accurate to label this, “A KIDS’ FILM™?”

All these questions make for one hell of a divisive and subjective film-going experience. It’s the kind of film that PIXAR fans will either irrationally despise or view with rose-tinted glasses. And it’s easy to understand why this is the case; relative to many superhero blockbusters, this is still quite the breath of fresh air. The family unit with super powers is a wholesome concept that may serve as an antidote to the self-serious tone of the latest Marvel and even DC films. Yet, it’s the usual symptoms of TFAS and Sequelitis that turn up when investigating its flaws: a contrived, easily telegraphed plot, the same, old lessons, a reliance on the characters’ charm over actual development, and — last but probably most prominent — a refusal to raise the stakes and instigate meaningful conflict. In the first film, the family is on the brink of being torn apart; they have to embrace their powers in order to save the ‘ole clan. But its sequel replaces those heavy-hitting stakes with quasi-conflict: Bob doesn’t entirely know how to parent, Violet resents her crush’s memory of her being erased. Conflicts emerge from their superhero double lives, sure, but there is never a doubt that things will be OK; there is never a feeling that the family is really in much jeopardy.

For me, these flaws simply removed my ability to be absorbed into the action. Even the exciting spectacles, for all their visual poise and splendor, felt more or less vapid. I just didn’t care; not like I did with the original, at least. Now, maybe you can chalk that up to aging and growing cynical. Maybe the original isn’t so perfect either. But at least the original was original, at least its conflicts were moving in ways audiences had not been shown before. The danger with sequels is that you can do everything right by the book, and still fail to capture the magic of the first film. That’s because what makes a good sequel is not seeing the thing you love done slightly different. Rather, a good sequel gives you what you don’t even know you want: change, development, unexplored territory, a turn for the worse.

As a kids’ film, I suppose it works fine; it’s flashy and creative and there’s still plenty of story to go around. But The Incredibles 2 proves it’s not just a kids film by its very existence as a story with a 14-year old reference point. And for those who aren’t buying their tickets with their allowance, it’s an example of how to completely settle. I suppose, why would Disney go above and beyond? They’ve already got your money, don’t they? 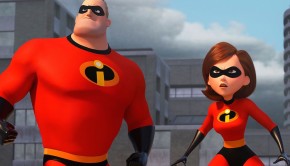 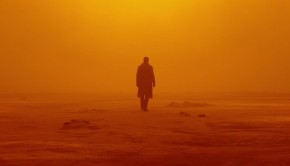 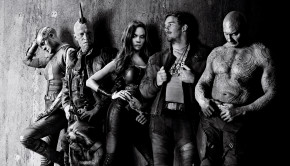 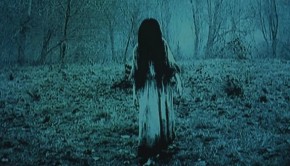