Jennifer Garner stars in Peppermint, a revenge fantasy in the vein of Death Wish; we look at the movie and features on the blu-ray release.

Jennifer Garner finally gets her turn to play out the revenge action hero fantasy but the result is less John Wick and more The Brave One (2007). A message about the consequences of taking the law into your own hands is lost in a sea of mindless violence and groan-worthy dialogue. She punches and shoots a gun like a true pro but even the top-notch leading lady holding the pistol this time can’t convince you that Peppermint is something worth savoring.

We know the template by now – our hero’s family is murdered, the legal system fails her, so she sets out on her own to achieve street justice. The bad guys aren’t any match for the five years of badass training she’s put into her mission, so when Riley North (Garner) comes back to town they don’t stand a chance. She’s packing some serious heat and Garcia (Juan Pablo Raba) better be shaking in his shoes for messing with the wrong woman’s family.

Director Pierre Morel goes through the motions that the screenplay by Chad St. John copies and pastes into sequence. It’s paint-by-numbers every step of the way, leaving its leading lady left to carry far more than any one person could handle. The only way you can tell that you’re not watching a Sunday afternoon TBS placeholder is that there’s strong language and bloodshed.

Morel’s vision to capture the parts of L.A. that you don’t see as often on the screen almost lets a handful of shots get close to Michael Mann homage territory but they still fall short due to the lack of creative energy in the performances and direction. If you take away the money spent on name talent and bombastic practical special effects (there’s oddly more explosions than you’d expect, and they’re admittedly pretty cool) what you’re left with isn’t anything more than a straight-to-the-bin Netflix D-list flick.

It’s a shame that a talented star like Garner isn’t given a better opportunity to flex her dramatic capabilities alongside her physical prowess. She throws herself into the part and hopefully her commitment helps attract some better collaborators and roles in the future. Peppermint leaves a bland taste where sweetness should reign supreme.

“Justice”: A quick featurette featuring soundbites from Jennifer Garner and director Pierre Morel. Garner’s enthusiasm is particularly noteworthy even if her excitement for the script makes you question her taste. This could have stood to be longer as the snippets we see of Garner in MMA and gun training are pretty cool.

Feature Commentary with Director Pierre Morel: It’s a standard commentary with insights into technical details, creative decision making, and anecdotes of the teamwork behind the scenes. Morel also basically breaks down the beats of the plot in plain English which makes the problems with the film’s story more plainly obvious, unfortunately. The man’s love of Los Angeles shines through and his mid-tone monologue is highlighted by moments like when he gets grossed out by an extreme close-up of slashed flesh being stapled together. 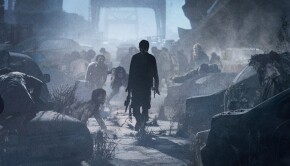