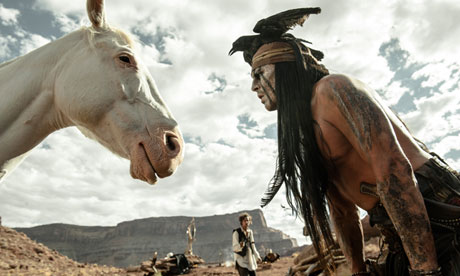 The REAL Truth About The Critics and The Lone Ranger

Lone Ranger actors Arnie Hammer and Johnny Depp are shouting it to the sky that a powerful cabal of movie critics have all joined forces in a secret, smelly lair to bring down Gore Verbinski’s Lone Ranger.  To be fair, The Feedback Society wanted to start with Michael Bay, but we were shouted down at the secret summit by A.O. Scott in a thrilling filibuster.

“It’s got to the point with American critics,” says Hammer, “where if you’re not as smart as Plato, you’re stupid. That seems like a sad way to live your life.”

We know it had to be the critics.  It just couldn’t be the fact that the movie is a brainless, bloated two and a half hour suckfest.  Since talent borrows and genius steals, we’re stealing a bit from one of our favourite podcasts, How Did This Get Made?.  We’ve assembled some five-star Lone Ranger reviews from Amazon.  You don’t have to have your opinions spoon fed to you by stuck up critics one moment longer.  Stop aligning yourself with the pathetic, cynical, Doritos-breath assholes who live their lives in such a sad manner — It’s time for the real truth about The Critics and The Lone Ranger.

“This is one of those movies when the critics get it wrong!! The movie was very good amd it is my 2nd favorite movie. There was nothing wrong about it. It was a little back in forth on the scenes but I really liked the movie. I had to see it a 2nd time so I did. Don’t listen to the critics. The movie was very unique and entertaining and had some of the best action scenes of the year. And Johnney Jepp did a great job as Tonto and so did Armie Hammer as the Lone Ranger! Rating: 10!”

Like Evan, we really like this Johnney Jepp guy.  He inhabits every role he takes on!  It’s Evan’s 2nd favourite movie of all time.  We’re scared to find out what his favourite movie is.  He likes it so much, he just had to see it a 2nd time — so he did!  Dance like no one is watching, Evan.

“I thought the movie was done very well, it kept my attention throughout the whole movie.”

We have no choice but to concede.  If a movie can hold our attention in the middle of this befuddling universe, it deserves at least a five-star rating.  Forget story or character — it’s important to set the bar high.  If we can at least follow what the people on the screen are saying and doing, a movie should be marked a winner!

“I LOVED the movie The Lone Ranger!Despite the idiots who THINK they know it all, the movie was great entertainment and had the whole movie crowd erupting into laughter!”

Did Kassie just call us idiots?  Well, she’s got us there.

“Film Critics viewed it last week and, all of them loved it. “This movie is fantastic to its core!,” claims Gerry O. “It is funny, entertaining, and very thrilling,” remarks Raven D.”

We want whatever drugs this guy is on.  He’s created a fantasy realm where the all of the world’s top critics steer him towards the correct multiplex every time (especially Raven D. and Gerry O.???).

“I already had an idea what this movie would be like, cowboys fighting each other. Based on all the stories about Lone Ranger, I also anticipated one of the characters would be the Indian, Tonto. I was right!”

Holy fuck!  Amazing!  It’s like he was looking into a crystal ball!  To be fair, he had heard all these stories going around about this Lone Ranger fellow beforehand.

“Bravo. The Lone Ranger is a new accomplishment in the grand stages of art and wonder. Everything we as human beings have been waiting for during our time on Earth comes from the celestial masterpiece that is 2013’s The Lone Ranger.”

This was in the five-star reviews, but we have to guess that anyone who can write so majestically must be fucking with us.  This can’t be a real opinion.  It just can’t be.

“I saw this movie twice and will be buying the DVD. My husband never buys DVD’s but wants this one because we enjoyed it so much.”

He NEVER buys DVDs.  This movie has changed his entire thought process regarding the owning of physical entertainment media.  That’s powerful stuff.

“Movies should not be judged until they have been in the theaters for at least a couple of weeks, thus allowing the public an opportunity to make their own decisions on whether it is good or not.”

Whoa, whoa, Donna.  Slow down.  No need to create Utopia.  Also, can’t people make their own decisions, regardless of the critics?  Do people that like this movie respect the opinions of the know-it-all-know-nothing critics anyway?

The Editor is the all-knowing, all-seeing, all-watching, all-drinking master of space time and dimension. Slayer of fine scotches, lover of many women, driver of hot cars. His Dad could beat up your Dad. All hail The Editor!