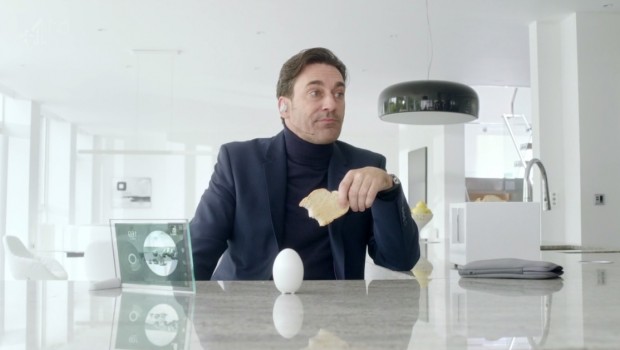 Black Mirror has quietly been one of the best little shows on TV, and now they’ve turned their techno-Twilight Zone anthology into a Christmas movie.

If you’re a fan of The Twilight Zone or Alfred Hitchcock Presents and you haven’t seen Black Mirror, get on it.  It’s been a long time since anyone’s tried to do an anthology TV series with no real continuity from episode-to-episode, threading together the installments with a mood, theme, or message instead of with the plot or a common setting or a cast of characters. But that’s exactly what Charlie Brooker has done over the last few years with his all-too-few (six), one-hour episodes for Britain’s Channel 4.  This Christmas past, a seventh episode emerged, whetting the screen for a possible third season, and man, what a whetter it was.

The previous six episodes of Black Mirror all glimpse into the next few decades of social and technological evolution, showing us what viral videos, celebrity culture, criminal justice, energy generation, and virtual experience might look like before the ends of our lifetimes.  Though some episodes hit much harder than others, they’re all far more entertaining and thought-provoking than most series confined by a static cast, set, and storyline.  Watching Black Mirror makes one wonder, with all the recycling of ideas being done in entertainment media today, why no one has thought of producing such a program until now.  Sure, the aforementioned The Twilight Zone and AHP were briefly resurrected with some success in the eighties along with shows like Spielberg’s Amazing Stories and Stephen King’s should’ve-been-made-for-TV Creepshow, but that was a long time ago, and TV seems to have forgotten that viewers can be brought back to the trough with more than just a what-will-happen-to-our-hero-next cliffhanger; though a weekly episode is self-contained, facets like mood, style, and attitude can make us faithful to a program even if the story starts anew each time we tune in.

In some ways this approach makes more sense for modern consumption:  it really doesn’t matter which order one watches Twilight Zone or Black Mirror in, or indeed, if one watches them all.  There’s no thread to forget, no recurring characters to become annoyed with, no stagnancy of storytelling, just fresh-baked science fiction in single-servings.

White Christmas, the seventh and arguably best episode of Black Mirror, plays with the idea of coded consciousness in ways that previous installments like Be Right Back and The Entire History of You have toyed with.  This extended, 80-minute episode starring John Hamm is practically a feature-length investigation of several of the ways our world might be affected by our ability to capture human consciousness (personality, thinking, brain patterns, tastes, memories) in digital form.  We all know we’ll be heading down this path one day, but how might we use this technology once it’s available to us?  That’s what we really don’t know…or do we?  Will we use it to ‘clone’ machines that think like us so they can do our menial chores?  Will we use it to ensure our own immortality beyond the corporeal limitations of our selves?  Will we use it to create life-like digital companionship (as Spike Jonze has already guessed we will in Her)?  Will we use it to tamper with memory a la Eternal Sunshine of the Spotless Mind?  Or will our ability to encode the human brain lead us to even harder-to-imagine endgames with equally dazzling and horrific potential?

The one common thread of all seven Black Mirrors is the suggestion that the technology we’re currently immersing ourselves in — most of us by dashing in headlong — will eventually bite our bums in ways that we should be able to anticipate, but lazily choose not to.  In Charlie Brooker’s own comments about the series, he’s stated that since so much modern cinema and TV is designed with the basic purpose of being reassuring, he felt there was a gap (much like the one that Rod Serling once filled) leaving room for a show that makes us worry.  Black Mirror does exactly this: it leaves us unsettled, and at its best, makes us recall it for months when we hear in the news about crimes connected to social media, about criminals being tried in the court of digital opinion, about politicians being swayed more by Twitter trends than by needs in the physical realm.

White Christmas tells a story of a world where everyone is equipped with Z-eyes, Google-Glass-like devices that cannot be removed.  They are used to turn the human eye into a combination camera, recorder, broadcaster, and ‘blocker,’ the last of which allows the user to ‘block’ any other person, essentially muting the offender so that he or she can no longer be seen or heard by the blocker in real life until the function is reversed.  If I’m annoyed with you, I can just focus on your image and block you, leaving you as a muffled, greyish blob that I need not be bothered with.  And, because our images are both programmed into the Z-eyes mainframe, you won’t be able to see or hear me either until I choose to unblock you.  Sound familiar?  Like all the best dystopian fiction, Black Mirror equips itself with many recognizable threads that bind the fictional future to our own time, making it seem both far out and familiar.  Blocking with Z-eyes isn’t all that different from blocking someone in social media — the only real difference is that one act is manifest in the physical world and the other is not.  And if the grey area between the actual and virtual world is widening, then the difference between these types of ‘blocks’ is even smaller.

Actually, The New Twilight Zone has used this idea before.  In a mid-eighties installment called To See the Invisible Man, a criminal is punished with a distinct mark on his forehead that alerts all others to shun him, leaving him free to roam the streets, but unable to communicate with anyone.  The notion of punishing with isolation and loneliness without traditional imprisonment is one that comes up in Black Mirror stories again and again.  In White Christmas, it’s only a small part of the story, but a very eerie one, equally as eerie as the notion of putting a ‘cookie’ in your brain for a few weeks so it can code your consciousness, then removing it to have your way with your own digital self.

Beyond these basic premises, it’s impossible to describe White Christmas without unforgivable spoilage, so let me just finish by mentioning how great it is to see John Hamm back on TV.  This episode (which is practically a made-for-TV movie) casts a man who most of us know as Don Draper in the role of a digital hustler.  In his world, most single, young men are so inept when dealing with single, young women that this shortcoming (and the advanced technology) can easily be played to his dark advantage.  He uses the access that other people’s Z-eyes provide to coach young men through the pick-up process in real time.  Like some rogue, futuristic Frank T.J. Mackie crossed with Perv-Cyrano, he watches his clients select a prospective female, accesses the woman’s profile using an image of her face and advises the client as he approaches, engages and smooth-talks her toward the desired result.  It’s a huge testament to Hamm’s skill that as much as this prey-on-emotions huckster should remind us of a certain Madison Avenue braintrust, he’s actually an entirely distinct and fresh character.

Black Mirror is now available for viewing through some of the most well-known streaming services.  Get your face in front of it before the future leaves its darkened shards in the back of your head. 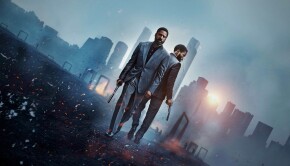 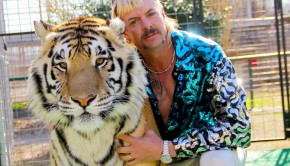 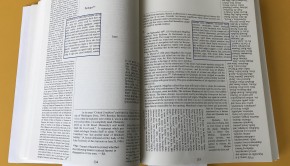 House of Leaves: The Screenplay → 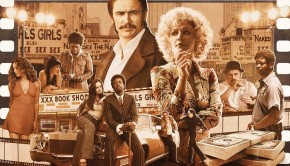