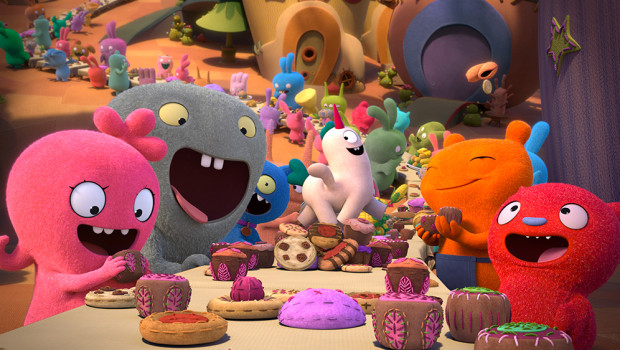 Our own brave and intrepid writer, Thomas, is a self-flagellating glutton for punishment, or he lost a bet, or whatever.  Either way, he reviews UglyDolls.

This is an odd review for me. It’s not to say I’m incapable of finding enjoyment in children’s movies; I’ve enjoyed 90% of Pixar’s oeuvre, and I remember the Shrek movies hitting quite a few of the right notes back in the day, before they were sacrificed at the altar of meme-dom. The problem exists with a certain type of children’s movie: the low-effort, cynical cash grab on a popular existing toy, designed to pull in children who already sleep with one of these plush abominations (along with their unwitting parents).

Now, I’m painfully aware that the above applies to some of my most treasured cartoon franchises, specifically Transformers and Teenage Mutant Ninja Turtles. However, when I was exposed to those, I wasn’t in on the joke, and the rose-tinted lens of nostalgia has tilted my view of these franchises to the positive, despite them being just as guilty as these UglyDolls. The problem is that I am now a bitter husk, dry-aged in the wind of a cruel and indifferent world, though that isn’t the only thing that soured my experience of UglyDolls. The fact is I went to the movie alone, and under duress.

Not to take us too far away from the review, but I am an avid fantasy football player. I’ll pause here for mocking laughter. And not only do I engage in this least prestigious of social pursuits, but I play with a group of relentless sociopaths, bent on turning a fun little activity into a twisted game of chance. Case in point: one of my leagues has a provision that allows the person with the most points at the end of the year to force one of the losing players to go to a movie of their choice. Alone. Last year, the unlucky recipient was The Feedback Society’s own Jeff Thiessen, who was compelled to view The Star: an animated film that appears to feature the animals present at the birth of Jesus. At least that’s what I assume based on the poster, as he refuses to talk about the experience.

This year I was a natural choice, being that I have all the confidence and bravado of a winning fantasy football player, without any of the talent. So, I ignored the concerned look from the gentleman who scanned my ticket as he looked around to confirm I didn’t have a child with me, and sat down to the longest ninety minutes of my life.

I should start by saying that UglyDolls isn’t aggressively bad or poorly made, it’s just really forgettable, and totally unoriginal. There’s nothing in here that hasn’t been done better in another animated film. It might be inoffensive enough to park your wee lad or lass in front of while you sneak away to grab a whiskey, but if you’re actually planning on watching a movie with your child, there are age-suitable films that are much more compelling.

The basic premise involves a village (the creatively named Uglyville) that is home to a bunch of misassembled toys, living blissfully unaware that they are assembly line rejects not fit for children. A motley crew of one-eyed, floppy-eared, amorphous – but admittedly cute – fuzzies, who all naively dream of the day they will be adopted by a child. Stop me if you’ve heard this story before.

One particularly enterprising and observant doll (she’s named Moxie, get it?) decides she wants to find out why none of the denizens of Uglyville are ever, in fact, adopted. She, along with a number of other misshapen citizens, journey to where the perfect toys live (unsurprisingly called Perfection), and stumble across a vast conspiracy meant to keep the ugly dolls from ever making it to hands of children. Cue a righteous struggle to prove that everyone has unique and inherent worth, complete with so-called perfect dolls finding out that being beautiful isn’t everything.

There’s lots of songs (the cast is complete with Kelly Clarkson, Janelle Monae, Nick Jones, Pitbull, and more), and lots of lessons learned about judging books by their covers. The problem is that all these lessons have been learned in better movies. Some of it is shockingly derivative, too; there’s an incinerator scene that is almost exactly the same as the one in Toy Story 3. Most of the humour didn’t really land, aside from a character called Gibberish Cat (you can guess how it speaks) that consistently cracked me up. There’s also some confusing messaging and verbiage. The dolls in Uglyville share little affirmations like “don’t you look ugly today” as a positive, but when they are called ugly in Perfection, they react as though it’s an insult. I’m probably thinking too hard about it.

The point is, we’ve seen all of this before. We’ve learned the message about not judging others. We’ve told kids that what makes them different can be a strength rather than a weakness. We’ve had better songs jingling in the back of our minds for days, and those songs didn’t feature Pitbull. Sure, the animation is fine, the voice acting is adequate, but neither set UglyDolls apart from the litany of superior films covering the subject matter. The whole enterprise is simply stale, and lacking anything that would earn it repeat viewings, or even a real reason to exist. Sure, we learned along the way that beauty is only skin deep, but the banality of UglyDolls runs right to its core.

Thomas Weinmaster is a Saskatoon-based repository for useless trivia and obscure Simpsons quotes. He enjoys long walks on the beach, the Seattle Seahawks, and pretentious beer choices. 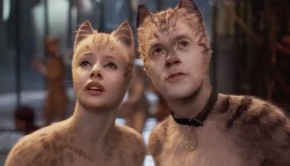 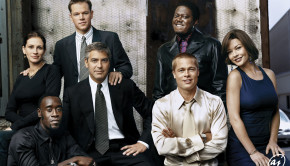 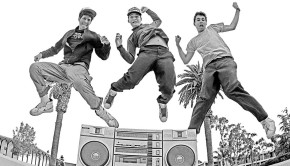 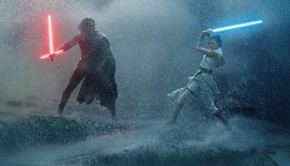